A study in contrasts. That's the best way to describe Part 11 of Mark Frost and David Lynch's revived Twin Peaks, which opens with a brief moment of doom-laden calm—three young boys playing catch happening upon the bruised and beaten but very much alive Miriam Sullivan (Sarah Jean Long)—then details, for its first half, the many ways in which the titular town, as well as the few-states-over locale of Buckhorn, South Dakota, are coming unglued. But this is dramatic incident Lynch-style, which means that the narrative rhythms are always shifting (violently, unpredictably), as if someone was continually revving a car engine into the red, but never in a calculable way. 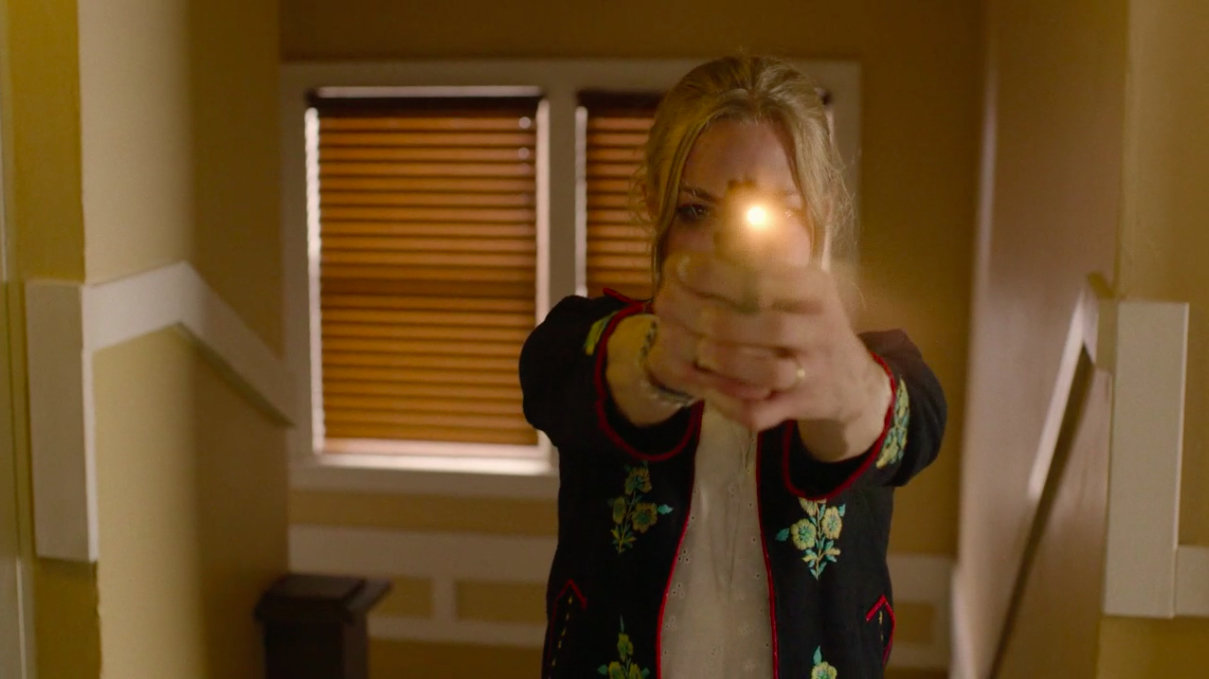 
The original “Twin Peaks” was both a show about the intractable trauma of abuse, and also a show about the overwhelming power of love (among other things), but a large part of what made Lynch’s short-lived series such a watershed cultural moment was how fearlessly it shined a lot into the black void between such ostensibly disparate themes, how it suggested they weren’t as unrelated as we might assume (or hope). “Twin Peaks,” for all its moral shading, has never been shy about pitting pure good against pure evil — and that’s truer than ever in “The Return,” with its diametrically opposed Dale Coopers — but Lynch remains more interested in the dynamic between them than he does the idea that one might defeat the other. For all of its symbols and mysticism, this isn’t “The Lord of the Rings,” this isn’t a story in which sadism can be eradicated (no matter how unsurprising it would be at this point if the last episode ended with somebody throwing a ring into an active volcano). On the contrary, it’s a story in which light and dark are forced to co-exist, where pearls of beauty are snatched from the clutches of a cruel world and horror is hiding just below the surface like dirt (or clues) under a fingernail. It’s a story in which cognitive dissonance is practically the only honest thing that someone can feel.


David Lynch actors have always brought it all. They go overboard, amping up the intensity and surface emotion, as though channeling the styles of decades long past. Such overt stylization in performance was noticeable in the original Twin Peaks, but here, set against the sharpness of digital video, it's even more extreme. Not every actor in the show pulls it off, or even tries. Some give it a go, but don't get far, like Amanda Seyfried. Some milk the opportunity for gold, like Michael Cera's cameo as Wally Brando. 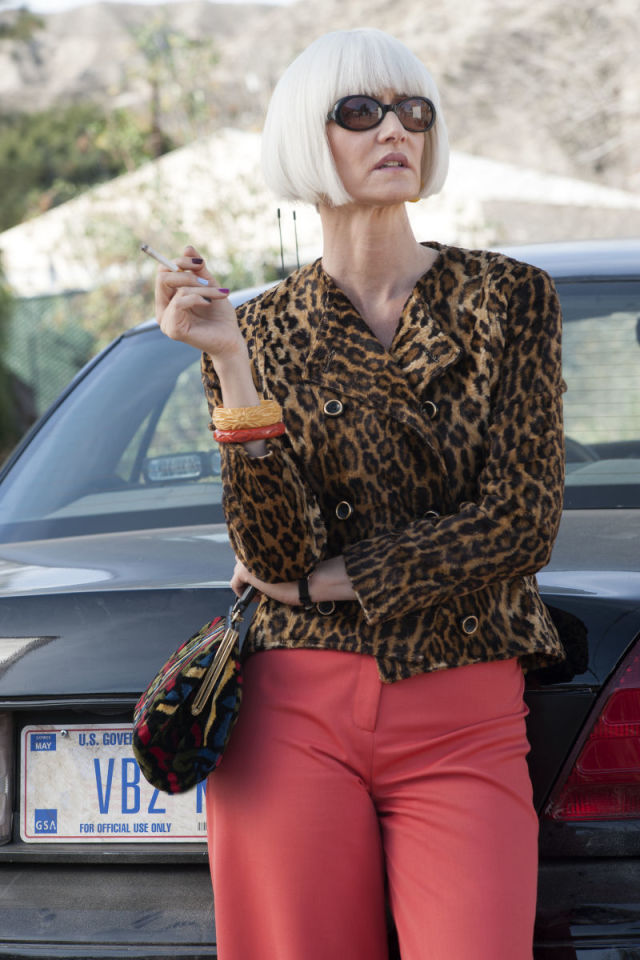 Then there are the real heroes. The actors who get it. Those of the original cast, most obviously, but also some new faces. Laura Dern's stern, own-the-room demeanor is electric, and not unexpected given her history with Lynch. The same is true of Naomi Watts's wide-eyed housewife. But even newbies to Lynch's work bring it all. Matthew Lillard's horrified, angry, confused face is totally out there, and probably his best performance since Scream. 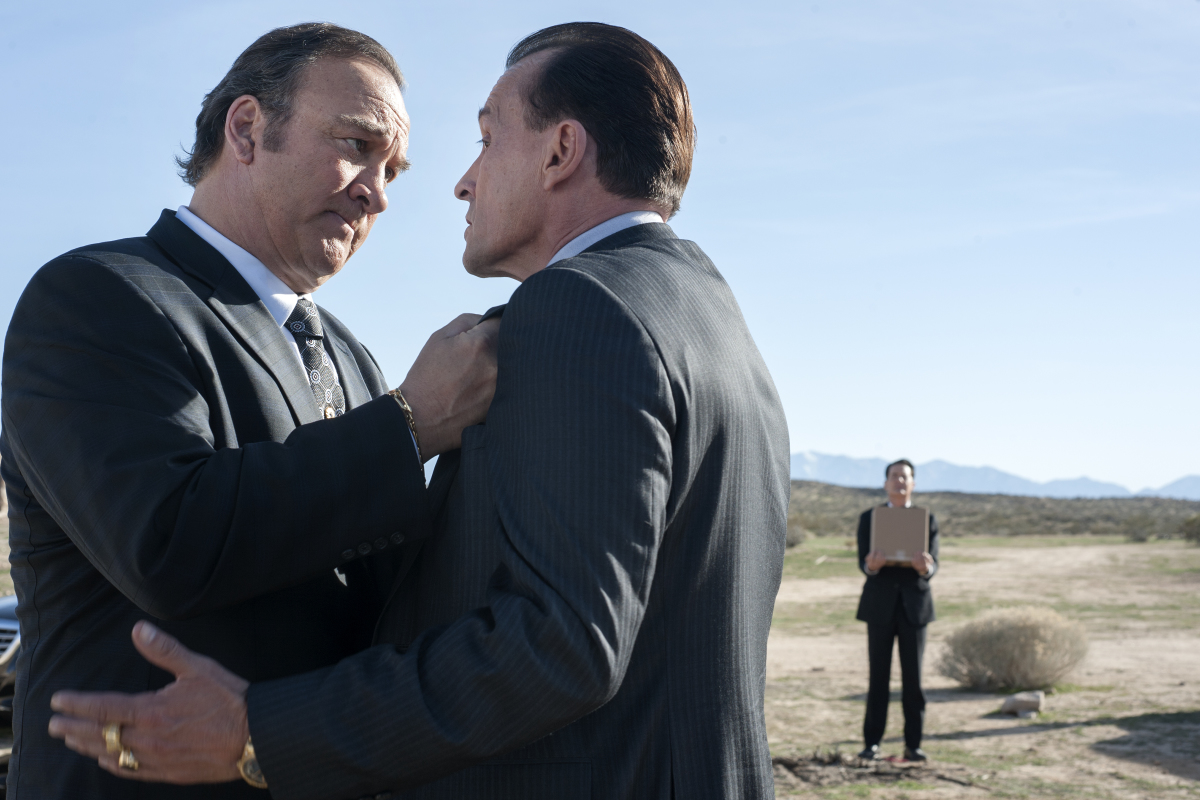 Then there's Jim Belushi, until now one of the least funny individuals who ever tried to convince us otherwise. But maybe we were all very wrong. Maybe Belushi has always been great. Maybe he just hasn't been given the opportunity to shine the way he always knew he could. I don't know how it's happened, but Jim Belushi is extraordinary. In the space of two episodes he's show an amazing talent for wild, broadly physical expressions. It's a pleasure to watch any scene of his, staring at his face, seeing it transform dramatically from one moment to the next, always pausing for a moment to land in the most hilarious contorsion for a given line or reaction. Belushi's gift for pantomime is glorious, and apparently untapped for years—until Lynch let him loose on an unsuspecting audience.


Bullets are fired at the Double R, and Bobby swoops into action, scrambling out to investigate. Outside in the street a mother holds a gun, berating her husband for letting their young son get his hands on the firearm. It turns out he’s the one who pulled the trigger, and as Bobby looks on in amazement, the boy, unfazed, returns a bizarrely sullen gaze. But gets very strange…

Throughout this exchange, the car behind the family with the gun has been blaring its horn incessantly. Exasperated, Bobby goes to the driver’s window and is met by a furious, plump old woman who screams “We’re late. We’ve got miles to go. We have to go.”

Like Sheriff Truman’s inexplicably angry wife, it seems this is just another comic character dropped in for some light relief. Until a truly horrific undead child rises up from the passenger seat, reaching towards the woman and Bobby with some kind of fluid dripping from its mouth.

It’s just one of many shocking moments that make Twin Peaks so compelling, and so divisive. It’s also a wild tonal shift and the climax to one of the most brilliantly crafted scenes of The Return so far.


You can’t easily find its blend of existential terror, weird humor, and melodrama anywhere else, even though so much of modern television is heavily influenced by the series’ original two seasons. Something like Game of Thrones is so influential that there are lots and lots of shows visibly playing around with its particular DNA. But only Twin Peaks is Twin Peaks.

“Part 11” neatly synthesizes that quality, with each and every scene hitting some sort of bizarre high point. It jets wildly from Gordon staring at a swirling sky vortex to Bobby being confronted by some strange zombie child to Cooper finally mumbling the words “damn good” in reference to a piece of cherry pie, and it somehow makes them all feel like parts of the whole.

In short, Twin Peaks feels new, even though it’s a revival of an old show. How David Lynch and Mark Frost managed that, I’ll never know. But “Part 11” is a beautiful summary of why this miniseries is working so well. [...]

Properly balancing horror and absurdity is a big part of Twin Peaks’ core, but what’s fun about “Part 11” is how wildly scenes will swing from one to the other (sometimes stopping along the way into melodrama). These sorts of tonal shifts are common in all of Lynch’s films, but it also feels as if the more time the miniseries spends in Twin Peaks proper — and nearly half of this episode was set in the little town — the more the show starts to gain the qualities of the original two seasons.

It’s an interesting way to structure the show. The closer it skirts to Twin Peaks, the more it feels like a TV show and less like a collection of scenes from a bunch of other stories, stitched together through vague thematic connections. But the longer we spend in Twin Peaks, the more we realize that things there have gone very, very wrong for almost everybody from the original series.


David Lynch and Mark Frost’s reborn show is so damned good that it often feels unfair to everything else on television. When these two are operating at their Peak powers, even the best and brightest of the competition can’t hold a candle to the duo’s ability to leap back and forth between comedy, tragedy, suspense and outright horror (like ol’ Bill Hastings losing his head, or half of it anyway). It’s simply impossible to predict where this thing will go within any given scene, much less from one to the next. This wild blend of moods and styles draws you into the resulting drama rather than pushing you out of it. It leaves you desperate to see what these black magicians will do next. [...] 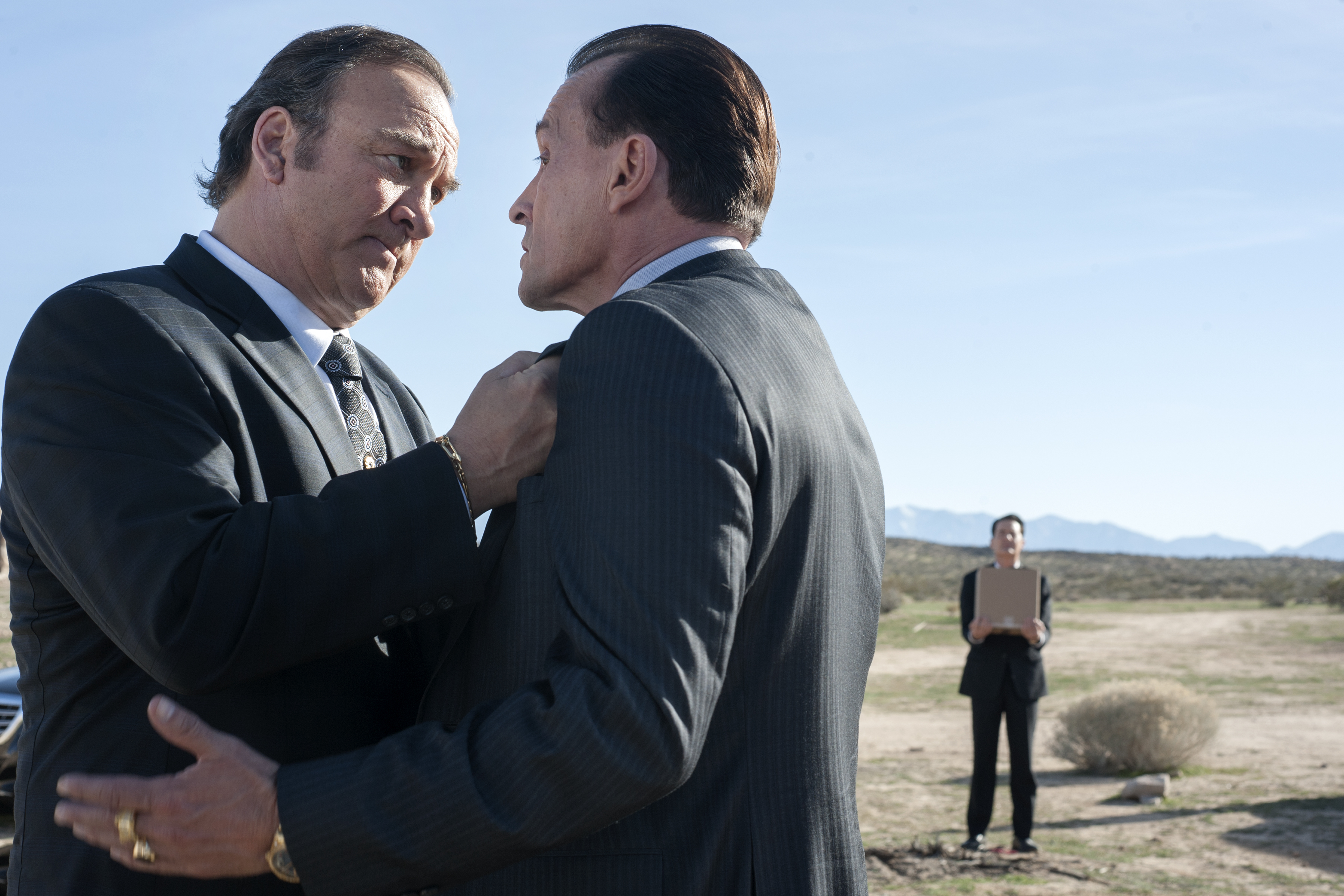 In its way, the psychologically super-charged time Shelly, Bobby and Becky spend in and around the Double R is as much of a technical/dramatic achievement as any tricky long take, dazzling musical montage or arthouse-in-your-living-room avant garde experiment. Its emotional highs and lows are seamlessly paced and utterly unpredictable. It’s Twin Peaks in miniature. Damn good.


On 15 January, 1947, the mutilated body of 22-year-old Elizabeth Short was found on a vacant lot in the Leimert Park neighbourhood of Los Angeles. Bisected, drained of blood, her mouth slashed from ear to ear, giving the victim a hideous Joker-like grin, Miss Short became a true crime icon. The murderer was never captured.

Twin Peaks co-creator David Lynch has long been fascinated by this unsolved murder case and even provided a blurb for what is considered to be the best book on the subject, John Gilmore’s ‘Severed’. [...]

Short died 70 years ago, but her cultural legacy lives on Twin Peaks and work of David Lynch.


the 11th episode was a bracing reminder of how much Lynch’s characters — and, by extension, us — accept the premises they and we are given. When Hawk presents Sheriff Truman with a map “that’s very old but always current,” he accepts the “black fire” symbol and the other terrible premonitions the map seems to suggest, and so do we. When Gordon and Albert come across the headless body of Ruth Davenport — after a sequence of events with more supernatural mojo than the car outside the Double R — they accept the writing on her arm as coordinates, and so do we. 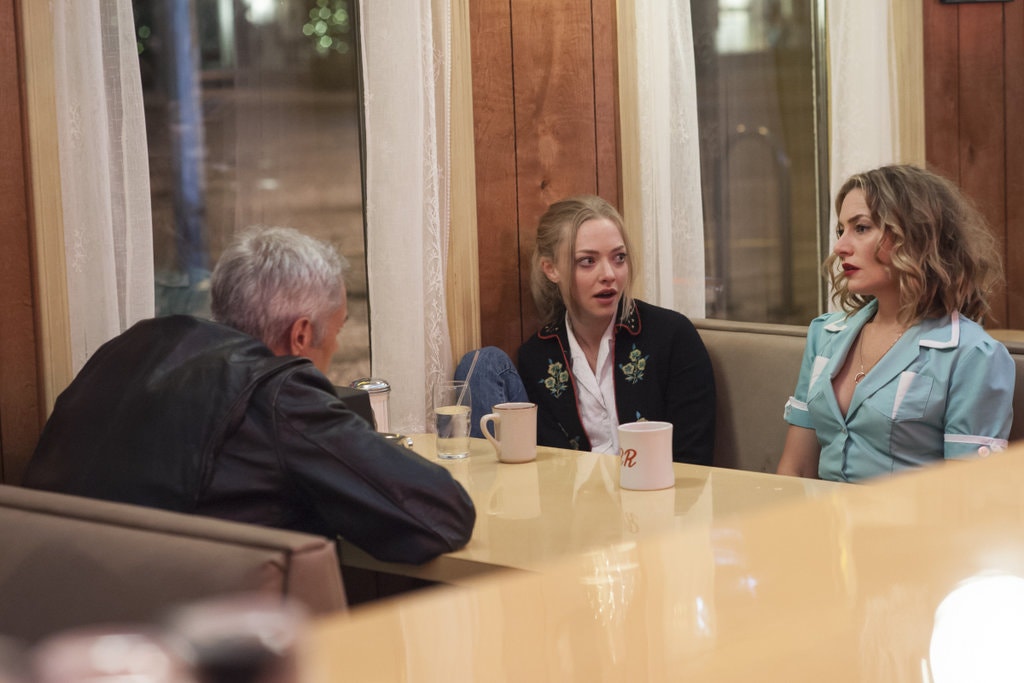 When the sinister apparition of a Woodsman slips into the back of an unmarked police car and rips the top of William Hastings’s head off, the F.B.I. brain trust accepts that the usual suspects don’t apply, and so do we. And when the Mitchums halt their plan to cap Dougie Jones because of Bradley’s dream, they accept the cherry pie in a box, and so do we.


“For all the parodies and homages that reference David Fincher’s iconic scene in “Seven,” this one may take the cake– well, the pie. The long drive into the desert. The long row of telephone lines on the side of the road. A mysterious box. An unarmed man held at gunpoint. These are the same images that evoked trepidation in Fincher’s film, but Lynch created a playful tone for “Twin Peaks.”

From the remixed version of “Viva Las Vegas” that kicks off Cooper’s limo ride to Bradley Mitchum’s wolf howls after finding his check, the scene was built on the same elements but carried an inverse outcome. What was in the box saves Cooper’s life instead of ending it, but his plan — if that’s what you can call it — works out just as flawlessly as John Doe’s in “Se7en.”

Return to “Part 11 - There’s fire where you are going”