For all the fun in guessing, “What’s next?” on “Twin Peaks,” Lynch remains a master at evoking enjoyment from the now. And of all things Lynch could’ve cooked up, an arm-wrestling death match turned out to be extremely enjoyable.

Mr. C delights in mocking his competitor, Renzo (Derek Meers). “What is this, kindergarten?” he says when first told of the terms, but his most devious side emerges mid-wrestle. Allowing his arm to bend but not touch the table is a quintessential power move, and one we’ve seen countless times over. (One wonders if David Lynch has ever seen Sylvester Stallone’s arm-wrestling classic “Over the Top,” and, if so, if this is his third consecutive episode that acts as a response to iconic ’90s entertainment.) 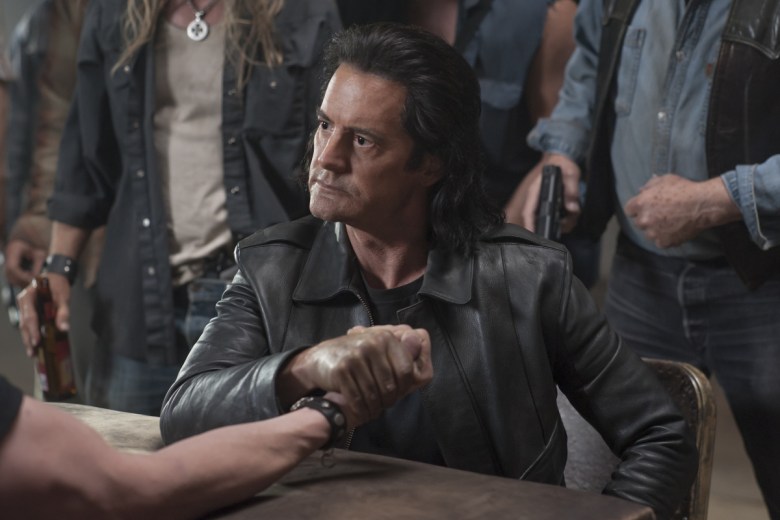 Yet how Mr. C repeatedly returns to “starting positions,” as he likes to call it, is what makes the scene gleefully delicious. “It hurt my arm when you moved it down here,” Mr. C says, allowing his arm to lower. “But it really hurt when you had it down here.” He then reverses the wrestlers’ positions to prove it, and here’s where the smile would creep across his face, if Mr. C was capable of such emotions.

But certainly it spread across yours. Combining the absurdity of arm-wrestling with the brutality of Mr. C’s mission is vintage “Peaks”: mixing genres and upending expectations to evoke an unexpected and unpredictable emotional effect. Here, it makes for an exchange both amusing and tense. Viewers can laugh all the way up to Mr. C caving in Renzo’s face. It’s bloody and shocking, making you recoil after delighting in tamer, less permanent pain. Though you knew it wouldn’t end well for his opponent, the value came in watching the specifics unfold. In studying Mr. C, there’s quite a bit to process in the moment and for the future.


Rounding out the Twin Peaks business is Dr. Amp and Nadine’s swooning meeting outside of Run Silent, Run Drapes, where she proudly displays his golden shit-digging shovel. For all the familiarity the actors exude with these long-recurring characters, they also show an endearing tenderness in two people who seem to be finding someone who understands them in full for the first time. This way of reinventing stable characters’ interactions so regularly is one of the many reasons Lynch can pull off throwing all that aforementioned shade. There was a continued sense of corrupted yet ecstatic joy in that magnificent scene back at Dougie’s home. Naomi Watts has been doing such adventurous melodramatic work in this series, and she seemed to really lock onto her character when she’s seen fully embracing the clearly compromising gifts that Dougie’s partnership with the Mitchums has paid off in. She gives a scene with a simpleton who can only repeat random words genuine intimacy, and Lynch reflects it with that stunning image of the lit-up playland in the backyard, soundtracked by a synth cover of “Dance of the Swans.” Not unlike Tchaikovsky’s composition, there’s unfettered glee but also a bit menace in Watts’ performance and the way Sonny Boy bounds around his new neon lair. In both Norma’s situation and Dougie’s, Lynch’s belief in the toxic influence and illusory relief that money brings on is evident.


What’s worse: Crushing a person’s skull or crushing their spirit? The back-from-the-dead Twin Peaks has seen its fair share of the former violation, courtesy of the supernaturally strong denizens of the Black Lodge. When those demonic entities are around – whether they’re Woodsmen assaulting radio-station employees or Dale Cooper‘s evil doppelganger shattering a rival criminal’s face with a single punch after an arm-wrestling bout – no cranium is safe. And then there’s the long, wordless scene starring Big Ed Hurley (Everett McGill, making his revival debut), which features no monsters and no murders – but as the credits roll over his sad and lonesome face, didn’t your brain feel under assault? 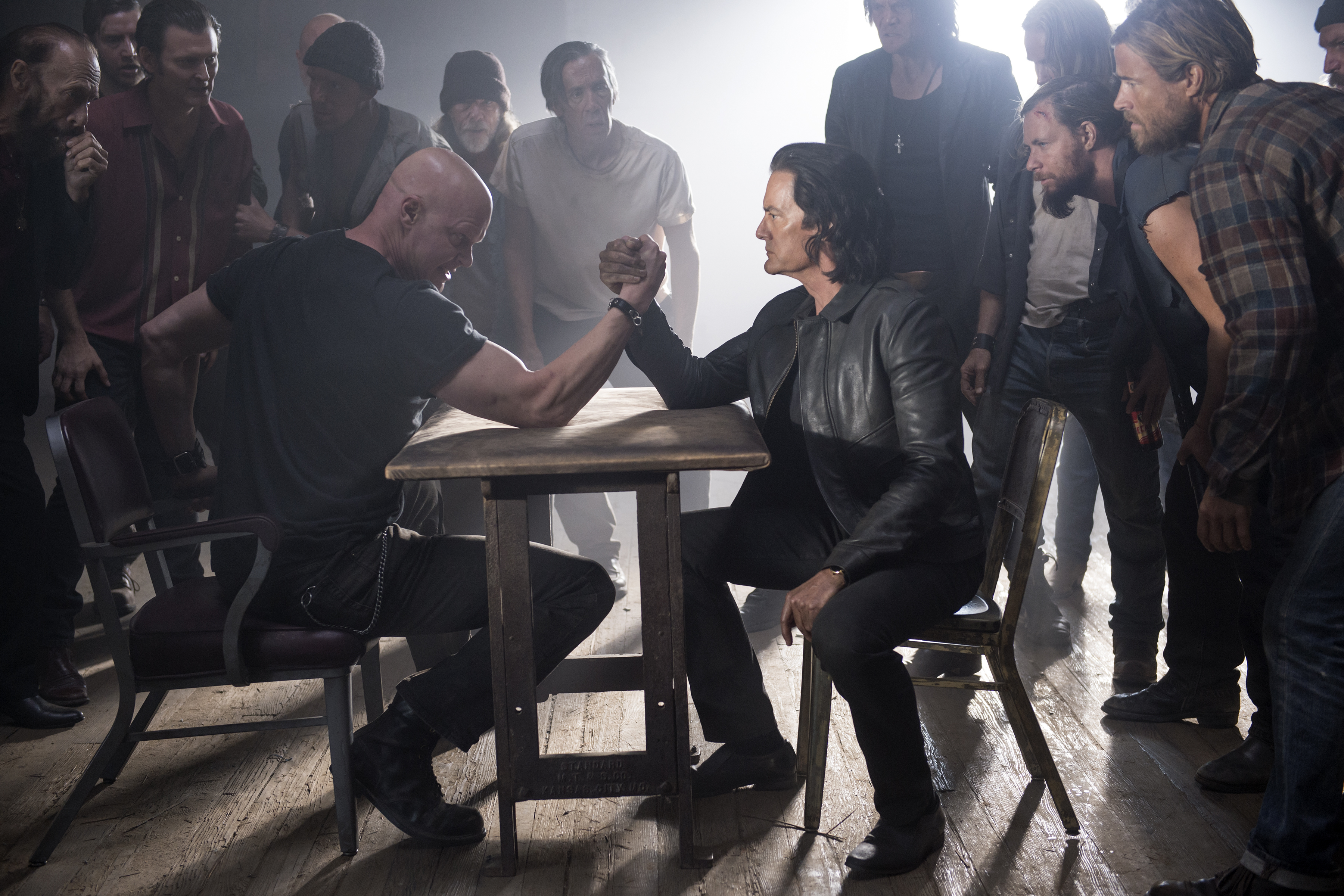 It’s not as if co-creator/director David Lynch is new to depicting the trials of growing up and getting old. You don’t need to look any farther afield than Twin Peaks‘ own Carl Rodd, played by Harry Dean Stanton, for a portrait of the weariness and wisdom that comes with that territory. (Stanton’s wordless appearance in the filmmaker’s 1999 movie The Straight Story is quietly devastating for the same reason.) Moreover, the visible effects of aging on actors such as Dana Ashbrook (Bobby Briggs), James Marshall (James Hurley), Michael Horse (Deputy Hawk), etc. were enough to take the breath away from any fan who remembered them primarily in their youthful, brown-haired heyday. It’s not that they looked bad, by any means – just that the lines in the face and the gray in their hair, or in James’ case the absence of hair altogether, remind you that you, too, have aged 25 years since our last visit to this sleepy, sinister town. [...]

Even Ed’s “Gas Farm” seems to be dying out from lack of business. So we’re left with a vision of this man alone at night, joylessly sipping soup – or is that garmonbozia? – from a Double R take-out cup and idly lighting fires that burn down to his fingers. With his high cheekbones and severe haircut, McGill gives the impression of a childless King Lear, surveying a kingdom of rust with no heirs to claim it.


An arm-wrestling match! A sparkling gym set! A conga line! A back massage! The thirteenth part of the revival season of Twin Peaks had all that and a bag of chips, plus a returning character from the original series, plus a frank conversation about the cost-benefit analysis of damn good cherry pie, plus final incontrovertible evidence that James is still cool.

Just You and I (Hulk | Vulture)


Big Ed, the man who raised James when no one else would, sitting alone in his antique gas station. He, like it, is a relic of a bygone time. There is no “Just You and I” for him. No Norma at his side. And here is where Lynch’s sense of empathy exists most of all. For as Ed eats his sad soup to go and the camera carefully, brilliantly, and subtly zooms in on the look upon his face, my heart lunges for him. For the man who is tired, lonesome, and forgotten.

But not by us.