From the beginning, “Twin Peaks” has embedded a clue to unlocking the show in its title. David Lynch and Mark Frost are captivated by dualities, whether they’re giving their characters literal doppelgängers or they’re exploring the extremes of good and evil within humanity as a whole. What’s apparent on the surface counts for little in “Twin Peaks.” A homecoming queen from an upstanding family can turn out to be a drug addicted part-time prostitute, while her father can be a serial sex offender. Just because someone looks pleasantly familiar doesn’t mean they’re okay. Everyone is split. 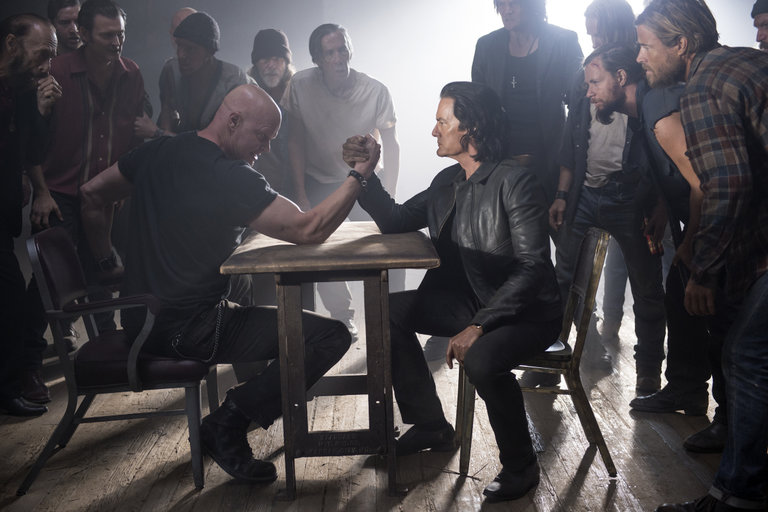 This week’s episode is roughly divided into two parts, with most of the first involving the two current incarnations of Agent Dale Cooper — the addled insurance agent Dougie Jones and the vicious Mr. C — while the second part mostly catches up with a handful of the show’s original characters, back in Twin Peaks. In terms of driving the plot forward, most of the important business gets dispatched early. But what happens with the two Coopers subtly affects the meaning of the shorter, more scattered scenes in northern Washington.
Call for help !


For all the huge things Twin Peaks has to say about the nature of evil—and its weird set pieces, bizarre plot twists, strange pacing, and gruesome violence—this sequence was a reminder that it also captures real human emotion like few other TV shows ever have or will. It’s no good eating alone, Big Ed. No good at all.


Kyle MacLachlan deserves special recognition for his role in lending power to Twin Peaks’ revival. Really, that should be “his roles,” because so far he’s played so many parts, each one with so many levels. As the spirit of Dale Cooper, trapped in the Red Room for interminable years or exploring the unknown spaces and voids of other planes, he’s been sorrowful, curious, dogged, and peaceful, all at once. As the actual Dougie Jones, he’s been ploddingly incurious and bluntly comic. As the shell of Dale Cooper, fumbling through a long-forgotten world, he’s touchingly (and sometimes infuriatingly) helpless, easily distracted, and weirdly affecting—in part because he’s so vulnerable, in part because he’s so easily delighted. A potato chip, a bite of cake, a lamp that turns on and off at a clap: All these small things please him utterly, and that ready joy is infectious.

More important to this performance, though, is the innocence in his eyes. A lesser actor might tip that look over into sappiness. MacLachlan manages to give this incarnation of Dale Cooper, the man stumbling through Dougie Jones’ life, both a childlike simplicity and an air of dignity. That’s no small feat when he spends his days walking straight into glass doors or becoming fascinated with the dandruff flakes on a colleague’s shoulders. There’s a fundamental innocence to this Dale Cooper, and MacLachlan conveys it with little more than his expression, his posture, and a few echoed words.

The Dale Cooper who was taken from Twin Peaks decades ago wasn’t innocent. He had seen far too much to be innocent. But Dale Cooper was incorruptible. That’s what makes MacLachlan’s other performance, as Dark Coop, so compelling. He’s a foul thing walking around in the form of perhaps the most principled, upright character ever to grace network television, and again MacLachlan communicates that with few gestures and fewer words. It radiates from the grim set of his jaw, from his slightly unnatural posture, from the depths of his coal-dark eyes. Those hard eyes pierce everyone who comes in contact with Dark Coop, and they pierce the screen, too, as MacLachlan shoots his impassive gaze straight at the camera.


If these forces can affect the dilation of time, that would explain many of the explicable occurrences: Major Briggs’ body not aging, Annie speaking to Laura, and the question that Mike asks in the Black Lodge : “Is it future or is it past ?” The Evolution of the Arm also once declared, “Time and time again,” indicating the cyclical nature of so much of what’s happening in the series. 
“You may not realize it, but Lara Flynn Boyle’s Donna [...] returned to Twin Peaks Sunday.

Where exactly was she in the show ? Well, it’s complicated. First, her face appeared in an old framed photo (of Laura and Donna, from the original series) sitting on a side table in Sarah Palmer’s living room. Then her voice (it was indeed Boyle’s voice) wafted out over the Road House as James Hurley sang his sweet, crazy, retro 50’s ballad “Just You And I” from Season 2. (Yes, they used the original track, with Boyle and Sheryl Lee as Maddie singing backup) [...] Also, those two brunettes on stage with James? Merely stand-ins for Donna and Maddie.

Finally, the ghost of Donna Hayward hovered over that one very popular Road House booth [...], as “Renee” listened to James sing and started to cry. Make no mistake, that’s Donna’s booth. You should remember, back in Season 2 when the Giant appeared in the Road House and warned Agent Cooper “It is happening again”, that Donna was sitting over in that same booth, just starting to cry for her lost best friend Laura. [...] But now, instead of Lara Flynn Boyle crying, we get Jessica Szohr crying. It would have been so poignant if it had been Lara! And apparently it almost was. Rumor has it that a certain beloved actress from the show leaked a bunch of production details at a fan convention (getting herself into hot water with Showtime) and one of those details was that Lara Flynn Boyle was offered a part in the new season, but turned it down.”

A welcome jolt of clarity ! (Dan Martin / The Guardian)


[The Cherry Pie] is not working for Coop because, as we also discover, the other branches of the RR Diner are serving an inferior version of Norma’s prized recipe, so the pie is not having the effect. You can practically hear Lynch baiting studio executives with Walter’s speech about “modifying a product to ensure maximum profitability.” 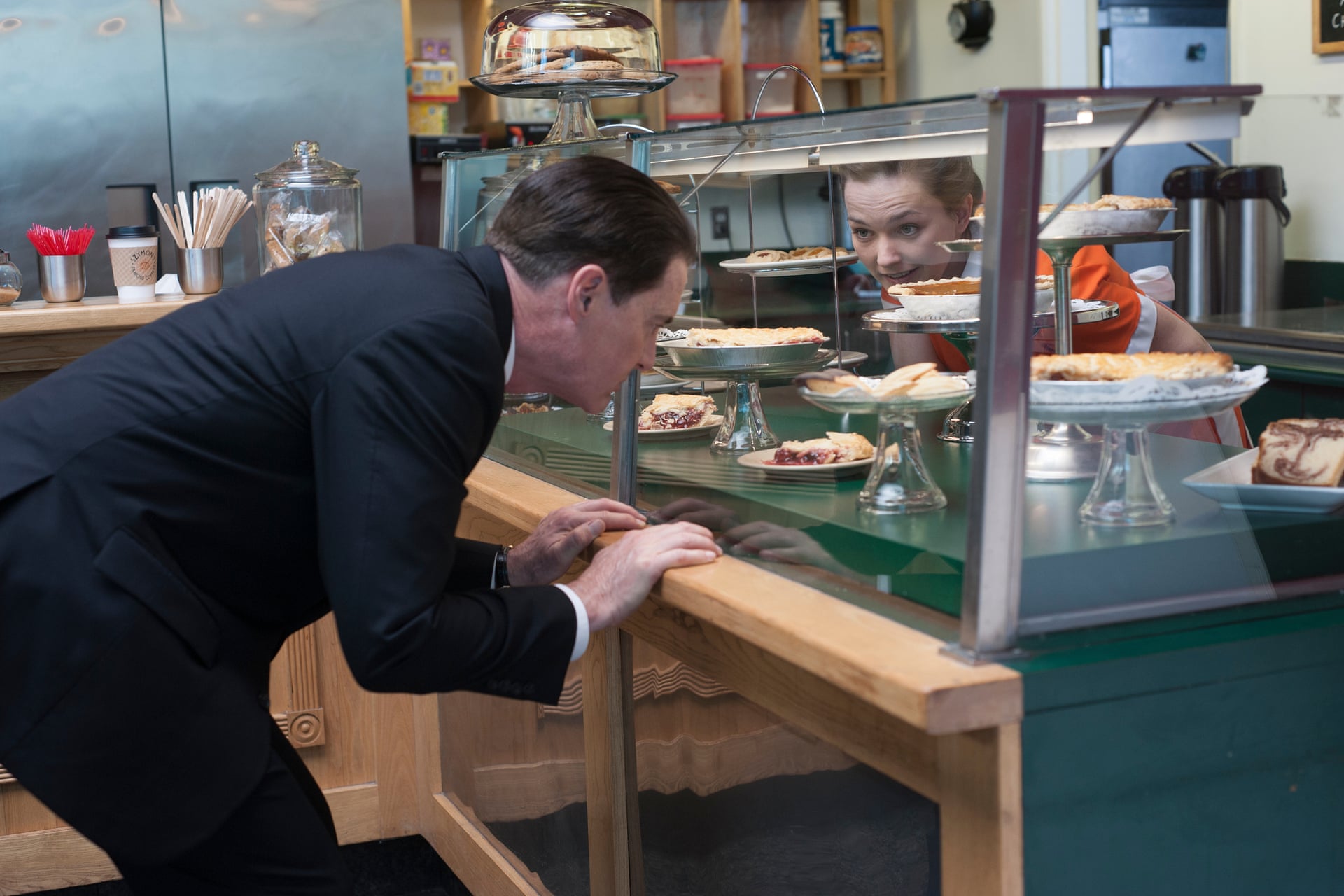 Camus’s The Myth of Sisyphus might have a few things to say about Big Ed Hurley at the end of the day. [...] David Lynch and Mark Frost see the town of Twin Peaks as practically eternal, existing in the same place while the sands constantly shift under its feet. That was the primary thrust of the first series, as well. High school sweethearts grow up, marry other people, but still love each other; teenagers embody archetypes that bend and twist but never break; the past intermingles freely with the present, sometimes violently so. In that framework, characters constantly had to question their identities. [...]

The cliché is that the more things change, the more they stay the same. Lynch is finding new and intense ways of illustrating such a banality. Whether they know it or not, the residents of Twin Peaks are barreling forward through time, re-living the same moments over. They may believe that they have a grasp on their identities, but they are the same people they have always been. They push the rock up the hill, only to have it roll back down again. They don’t know who they are, but they are themselves.

With every tic and affectation — every burst of violence from Evil Coop, every slurred pronouncement from Dougie Jones — MacLachlan further delineates the differences between the first Twin Peaks and the follow-up. At first, the tensions in this season simply seemed like a result of Lynch and Frost making the story they wanted to make, regardless of nostalgia. But heading into The Return’s final stretch, frustrated nostalgia almost seems to be the point. It’s even written into the text: The typically catatonic Dougie comes alive whenever he makes contact with iconic motifs from the original show, like coffee or cherry pie. These aren’t meta references for meta’s sake. Instead, they’re part of The Return’s larger meditation on how much or how little people, places, and things can shift over, well, almost 30 years.

We see it in the diminished state of Catherine Coulson, who was dying of cancer when she filmed her last scenes as the Log Lady; we see it in Amanda Seyfried’s Becky Burnett (née Briggs) following in her mother Shelly’s footsteps by getting trapped in an abusive relationship. Most of all, though, we see it in everything MacLachlan is doing, and how well he’s doing it.
Call for help !

What Is This, Kindergarten? (Keith Uhlich / MUBI) 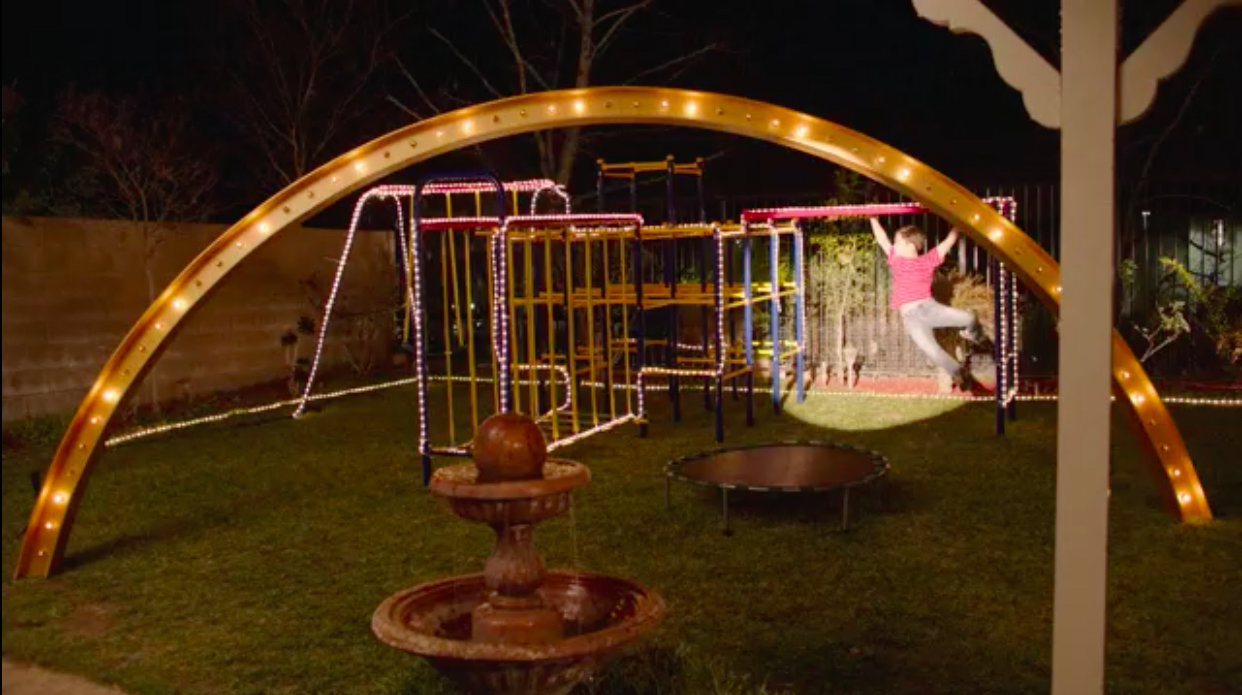 
James’s song near the end is perhaps the most winking moment. Fans have jokingly suggested that James Hurley, a less accomplished musician than the venue’s usual headliners, take the stage at the Roadhouse. For him to do so—performing a song from an infamous scene in the original Twin Peaks—feels distinctly playful. But as amusing as this is on its surface, it also hints at a more sinister theme. When James first sang the song to Donna—with Laura’s doppelgänger, Maddy, singing along—his inability to focus on just one girl drove home the heartbreak standing in his and Donna’s way. As cringe-inducing as the scene—and James’s falsetto—can be, there’s also an emotional, distinctly teenage tenderness at play. [...]

As funny as these characters’ pain can be, it’s hard to watch this episode and not come away feeling some of that pain ourselves. It’s telling that instead of concluding the episode with James’s amusing encore, Lynch chose to end on a silent shot of a forlorn Ed instead. Laugh all you want at the spectacle; underneath, the reality these characters inhabit is hardly funny.