The Season Three Premiere of 'Twin Peaks' Is Weirder Than Ever, Jess Zimmerman / VICE


There's a murdered woman this go-round too, but unlike Laura Palmer—discovered dead by someone who knew her, autopsied by the doctor who delivered her, eulogized by the priest who performed her baptism—her death is impersonal and detached, literally. Her head's found in a bed, but it's paired with an unidentified male body. Like the glass box in New York, it seems like a metaphor for the distance between the old Twin Peaks and the new. The central tragedy is disjointed and chimerical in a way that pushes it out of the realm of sentiment. The police officer who sees the body stares in disbelief instead of breaking down in tears. In a series that flits from the Pacific Northwest to New York to South Dakota to Las Vegas, the tragedy isn't even that central.


“Twin Peaks: The Return” is weird and creepy and slow. But it is interesting. The show is very stubbornly itself — not quite film and not quite TV, rejecting both standard storytelling and standard forms. It’s not especially fun to watch and it can be quite disturbing. But there is never a sense that you are watching something devoid of vision or intention. Lynch’s vision is so total and absolute that he can get away with what wouldn’t be otherwise acceptable .

‘Twin Peaks’ returns: What the critics are saying, a round-up of reviews by Chuck Barney / The Mercury News 
One of the creepiest images in the new “Twin Peaks” is a glass box, ensconced in a window in New York City, which is kept under constant observation in case something comes through it. [...]

“Twin Peaks,” returning 27 years after its debut, is no longer brand-new under the sun. But in its familiarly inscrutable first two hours, it still has the ability to turn your TV into that box — a quietly menacing portal through which something horrifying or wondrous might burst at any moment. [...]

The most affecting return, though, is Sheryl Lee as Laura Palmer, whose death set the series’s original story in motion. Reappearing to Cooper in the Black Lodge, she summons her character’s luminous, doomed teenage smile, as though she really were frozen in eternity: “I am dead, yet I live.” 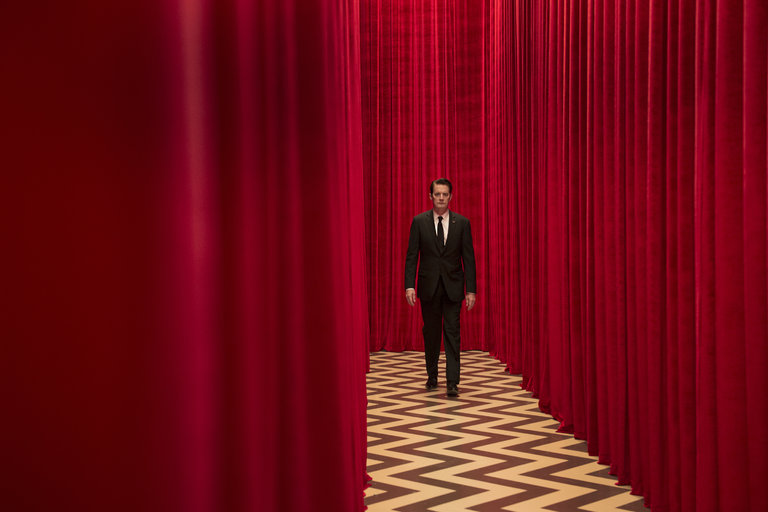 That gum you like has come back in style, Daniel Fienberg / The Hollywood Reporter


Twin Peaks is a sensation that engulfs you and a journey you take, not a list of events that happen. It's also a really strange show to attempt to review off of only two episodes. I generally bristle at the showrunners who claim their series is a 13- or 22-hour movie, but it's obvious this Twin Peaks is going to be an 18-hour unit. There was no discernible separation between hours and if credits hadn't rolled, the second hour could probably just as easily have flowed into the third. This isn't episodic TV. It's another thing.

Do Not Drop Up, Keith Uhlich / Mubi


Immediately obvious: Which way is up? The manner in which Lynch and cinematographer Peter Deming film the town waterfall and the billowing red curtains of the Black Lodge suggest that gravity itself has no place here. In a later sequence in the first two episodes, which premiered in a single two-hour bloc, Lynch makes sure we catch sight of a cardboard box emblazoned with "Do Not Drop Up." Though there's a clear break between the third and fourth words (it's literally two commands, not one), the mood the director conjures screws with our perception of normal syntax. Sense becomes nonsense becomes sense. And so boxes can be dropped up. [...]

If the early parts of a movie or television show (especially something as auteur-driven as this one) give us a sense of how to watch it as a whole, then this [Glass Box sequence] is likely the new Twin Peaks's key sequence: Watch. Wait. Something may occur. Or it may not. Learn to live with the duration, with the beautiful monotony. Impatience, boredom, irritation, agitation (all very grounding human emotions) segue into a more transcendental state of mind. It's telling that it's only after Sam and his gorgeous crush, Tracey (Madeline Zima)—who he unwisely sneaks into the box's key-coded vault—succumb to fleshly distractions that they become grist for the ethereal mill, both of them devoured by a faceless ghoul that, in its herky-jerky unrealness, is pure nightmare fuel. 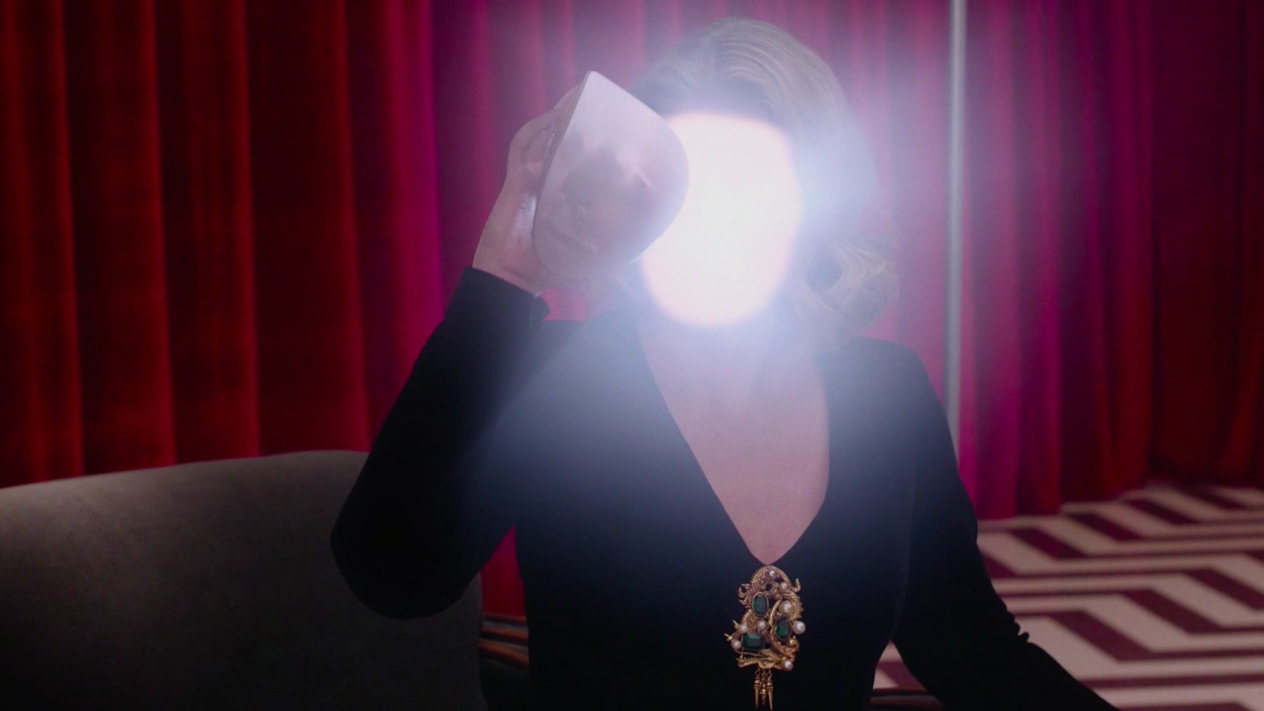 
There will be time for close analysis of Lynch’s latest, trust me – he does that to people. But what’s most striking about the opening movements of Twin Peaks‘ new season is that Lynch’s images are still, well, striking, every cut and composition blending into an anxious, rhapsodic spree of psychological torment, fury, and guilt. What comes across most potently is Lynch’s liberated artistry and style, allowed free reign and immediately making even the most bold of other TV series, from American Gods to The Americans, look timid and compromised in comparison to Lynch’s latest moondrunk flourish. 
"James is still cool," Shelly assures her friends, who all seem to think he's weird. "He's always been cool." It's a heart-meltingly sweet thing to about one of the show's most mocked characters – a former motorcycle-riding would-be heartthrob at the center of a noir-pastiche love triangle during Season Two that's frequently cited as the series' worst storylines. Now he's greeted with joy, the way you feel when you go to your 25-year high-school reunion and see pretty much anyone who managed to show up.

In this last scene, Lynch and Frost finally roll out not the red curtains but the red carpet, welcoming us back to the world and the characters we'd thought we'd lost. To steal the name of the show within the show from the original series, it's an invitation to love – a sign that despite all the horror we've witnessed and the 25-plus years of misery they imply, there are still good-hearted people out there, and in this show, waiting down at the roadhouse for us to show up and get to know them once more. It is happening again.


This is Lynch the experimental filmmaker — the filmmaker Lynch has always been.

We were reminded of this Sunday night via two hours of sumptuously photographed, obtuse, patience-taxing, and sometimes demonically horrifying imagery that I’ll bet single-handedly destroyed the nostalgic goodwill that had accrued since the show was announced. Some may have tuned into this thing expecting coffee and donuts and pie and sexy young people dancing in front of jukeboxes and riding motorcycles through the woods and eccentric character actors bantering, plus the occasional dream or nightmare or a bit of nonsensical plotting. Instead, they got two hours of Lynch’s 2002 short film series Rabbits. “Running swollen blue feet. Tearing. Scraping. Black. Old. Blood. Yellow. Saliva,” proclaims the humanoid rabbit patriarch, reciting poetry in a sitcom living room. 
Filled with giants, dwarves, monsters and ghosts, Twin Peaks most resembles a modern fairytale written on LSD then heavily redacted by the CIA. But at least the original series had the viewer-friendly structure of a whodunnit to glue the peculiarities together. The start of the new run is more of a what-is-it? [...]

Lynch is unusual among screen writer-directors in having separate and significant careers as a musician and visual artist, and his multi-skilling is ever more to the fore here. The intricate noisescape of squeaks, scratches and chords (Lynch takes a separate sole credit for sound design) could be released as an album; the images might be hung in the Museum of Modern Art. In a shot of New York at night, lit skyscrapers look like fountains flowing with gold. [...] 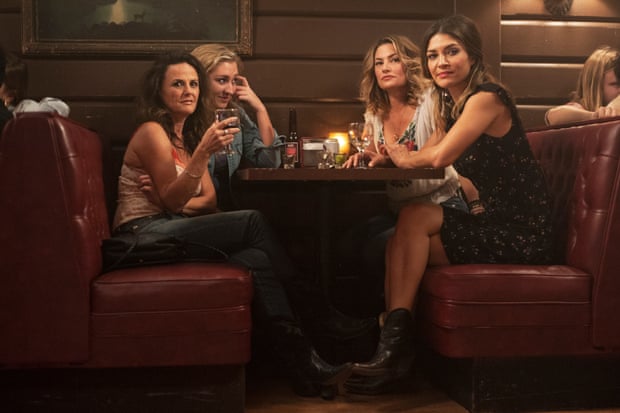 The surreal scenes and baffling narrative of the original Twin Peaks hit TV at a time when no one else was doing that kind of thing. Now that it’s rare to see a drama with the beginning, middle and end in that order, Lynch has remained ahead of the pack by going even further out there.
With this series, though, he must entice a new crowd while also satisfying those superfans who have spent the last 26 years drafting the show’s return in their minds. By gathering up loose ends and shaking them even looser, the first two hours seem more likely to please those already in the unknown. But this is a show that radically raised the creative ambitions of TV – we should give it time to reveal if it can be a game-changer again.