Am I the only one who thinks this is Bob? 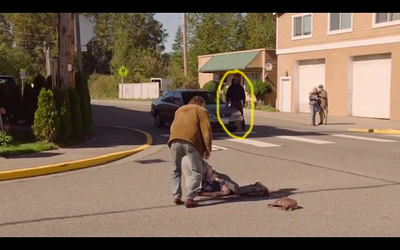 I think you are, indeed, Roberto

But that brings me another question about this scene : what do you think about the extras there ?
Call for help !

I don't think it's such a crazy thing to say! I had the same impression.
That car just appears in a sec after the kid is hit, the man seems to wear the clothes once associated with BOB and even the posture is very similar.
Besides, he's the only one present at the moment whose face is not shown: I think there's something going on here.
It could be another Spirit, maybe one seeking after the garmonbozia released from the mother's pain?
I don't think he's just a simple bystander.
«J'ai une âme solitaire»
Top

Man, that could be him!

I thought the extras in this scene were so bad! Or the way they were presented was. I don't know, the whole thing felt so much like it was filmed separately and that they were all over acting shock reactions instead of actually "being" shocked. It was a bit sad, because it kind of made me feel less of an impact from that horrible accident the more I saw them react to it...

BUT at the same time, I don't think any other scene has touched me more than when the car hit that kid. It was devastating. Horrible. A smack in the face. I have a kid myself and i don't know how often Ill will be able to watch that scene.

I had the same feeling about the extras!
I don't know if it was intentional, like a super-dramatic scene with a very weird emotionless crowd, to put emphasis or soften things up? With Lynch is hard to say sometimes

You never know. But I loved the episode!
Top

The length of screen time given to the shocked bystanders certainly was lengthy, plus I agree with other posters that the extras seemed false, badly acted or even saccharine, to a certain degree.

Given that this is Lynch, I can't help but think that it's deliberate. He considers every shot with great thought, so to leave such a horrific scene with noticably 'bad acting' from his extras seems purposeful and in no way a mistake
Top